Ethiopia makes an offer…but how will Eritrea respond?

That, for a fantasy and trick of fame

Go to their graves like beds, fight for a plot

Whereon the numbers cannot try the cause

Which is not tomb enough and continent

To hide the slain.

Hamlet’s words came to mind when I walked along a rampart near Badme in northern Ethiopia in 1999. The war lasted two years and killed an estimated 100,000 Ethiopians and Eritreans. Broken trucks and tanks were scattered throughout the bush. Bulldozers had created a rampart piling up hundreds Ethiopian bodies who had marched, World War One style, into a torrent of bullets. Arms and legs stuck out of the earth in grotesque poses. The stench was nauseating.

It should have been a minor border dispute but the egos of Isaias Afwerki and Meles Zenawi, presidents of Eritrea and Ethiopia, would not allow for negotiation. They were once close allies in the fight against the Russian-backed Derg government. The Eritreans were fighting for independence for 30 years and Isaias seem to feel comfortable with endless war and austerity. Meles Zenawi however wanted to create a new Ethiopia which would be a voluntary alliance of the country’s regions – who, in theory, could leave Ethiopia.  In 1994 they succeeded when their combined forces took over Addis Ababa. It worked for a while but when the border came to be drawn between the two countries, they could not agree on where the border should be and which side of it Badme was on.  In 1999 full scale war erupted between the erstwhile allies. 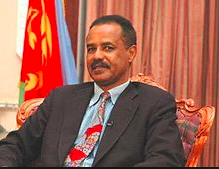 During a brief pause in the fighting I went to Asmara and had to wait a few days before I could interview the grim Isaias Afwerki who lectured me in great detail on the causes of the war and why it was all Ethiopia’s fault. As I left he handed me a map with the areas of Eritrean territory that Ethiopia was claiming shaded in. I then flew to Addis Ababa via Yemen and went straight to Meles. I showed him the map with Isaias’s shaded areas. Meles looked at it. “No this is quite wrong” he said with a wry smile. “We want much more than that”. I did not report on this conversation at the time –  I knew that Isaias had no sense of humour or irony.

The rest of the world applied pressure and eventually both sides agreed to arbitration which led to the Algiers Peace Accord. A panel of experts was set up, professors and cartographers who studied the old maps and walked the terrain and finally delivered their verdict. Badme, they said, belonged to Eritrea. Ethiopia rejected the ruling and refused to withdraw its troops. The war nearly started again. For Ethiopia it meant that all its trade had to go to Djibouti. Otherwise, Ethiopia was broadly left alone. Western countries applied little to no pressure on Addis Ababa because, although officially neutral, they quietly supported Ethiopia rather than Eritrea.

The fully armed stand-off continued for 18 years until this week when the new Ethiopian Prime Minister, Abiy Ahmed, declared that Ethiopia was ready to comply fully with the peace plan and accept the 2002 border commission ruling that Badme was Eritrean. It was a brave move and seems to suggest that the Tigrayan generals who took over the country as guerrilla fighters are now ready for peace. They still hold the reins of power and Abiy Ahmed, like Hailemariam Desalagne before him, is not from the ruling caste. He is more like the office manager than the director.

At present 95%  of Ethiopia’s exports by land go through the small but overcrowded port of Djibouti and it has now bought a part of the port for its exclusive use.  A solution to the border issue could mean that Ethiopia’s trade could also pass through the port of Eritrean port of Assab. Ethiopia’s strategy is to grow its industrial base with help from China so that it can sell manufactured goods to Africa and the world. China has loaned Ethiopia more than $13 billion, much of it to buy Chinese goods but also to help industrialise.

There is no sign of a new peaceful democratic political dispensation. As usual with Ethiopia political debate is left to the small elite who rule the country, most of them still Tigrayan generals who are rarely seen in public. Decision making is not transparent and there is little public debate – there is no opposition party in parliament. Civil society is weak but a series of protests have erupted manifesting an anger just beneath the surface. Abiy Ahmed is trying to get the economy growing again and thousands of political prisoners have been released. Who gave the order? Decision making is not transparent. His other significant policy has been to reach out to Eritrea calling on Isaias to reciprocate his charm offensive by opening the border between the two nations.

Will Isaias Afwerki respond? The end of the cold war between Eritrea and Ethiopia benefits Ethiopia but Isaias will face bigger problems than Abiy Ahmed.  The Ethiopian threat was his rationale for forcing young Eritreans to do ‘national service’ for years, a huge unpaid army of workers. Thousands of young Eritreans have fled the country and risked their lives to get out and find their way to America and Europe. Nor does his dictatorial style of government suit investors who will find that workers are not chosen by companies but sent to them to work for very low pay in and live in military service style labour camps.

But as long as Ethiopia has been in the wrong on the border issue Isaias Afwerki has been able to hold the moral and diplomatic high ground. That ground has shifted. The prospect of Isaias Afwerki as a peacetime leader does not look promising.